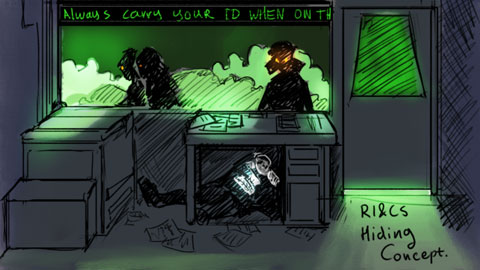 So, you have to stay hidden, but how, and why?

Well, for the why you’ll have to play the game, but rest assured, the game will give you ample reason not to be seen..

Staying Hidden
Early on in the development of Sanity of Morris, we said we wanted to do conflict-avoidance as a game mechanic. Hiding behind objects, with enemies patrolling around actively searching for movement and visual confirmation.
We gave the baddies a gun.
We gave the player a flashlight.
And there is where things got interesting.

See it’s easy ducking into an airduct (you’ll be doing that) hiding behind a desk (that too) or corpses of the ones who have gone before you (just saying…).
But as most of the game will be in dark rooms where the electical work is on the dodgy side of things, you will want want to use your flashlight to see where you are going.

But if you can see where you are going…. so can they.
Turning on and off your flashlight will make the difference between life and death.

Testing puzzle design
This week we’ve set up several rooms. We have been placing obstacles around the level and seeing how avoiding multiple enemies will work for the player. Our gamedesigners are testing these designs on our coders and artists, as usually is the case in this stage of development.
We are looking forward to testing our designs with players or devs from other companies in the near future. But it’s sure been an interesting week with some great progress.

Want to know more? Just ask in the comments!
Don’t forget to wishlist the game and follow us for more updates!