From level to level 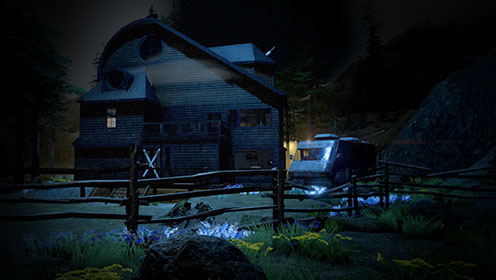 This week we’ve been working on stitching the levels of Sanity of Morris together. (Pardon the knitting metaphore, old habbits…)

Sanity of Morris is a game aiming to give you several nights of thilling terror and intriguing plot developments. We’re planning three seperate levels each with their own game mechanics, style, flavour perspective of the story.

Bridging worlds.
As you might see in our screenshots, these area’s have very distinct flavours. We knew from the very start of gamedesign that we wanted to to this, make the three levels and story told within, very distinct from eachother.
Doing so is one of the (hidden) core features of the game. You’ll get why once you end up in level two .

One of the difficulities we had, was how to bridge these environments, and how John, our main character is going to cope with the change of scenery.

To make this as fitting as possible, we had to shift quite some parts of the level around this week.
As a player, these are aspects to development you’ll probably never see. You encounter the world map as it is and there’s little to indicate it was ever any differen.
But during our design sessions, some MAJOR locations got shifted around quite a lot untill we were satisfied it made sense.

Testing!
This week saw the conclusion of that process as transitions between the levels are now in place. An exciting development for the team, as we can now play (and test) the game from A to Z, see where content is missing, or lacking the quality we think it needs.
Who knows, we might be on the lookout for alpha testers soon.